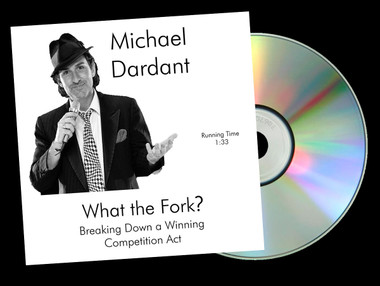 What the Fork? - DVD

New Orleans own award winning comedy magician, Michael Dardant aka Magic Mike (Not the... Dancer) brings his Cajun flair to the stage and mesmerizes any audience with ease. Recently,  he became the most decorated magician in North America claiming over 30 Championship Awards and bringing 2 acts to FISM!

What The Fork is an 1 1/2 HR. breakdown of Michael's Gold Medal Close-Up Act. He performs the routine and then resets in front of the camera!
Next is a riveting and inspiring explanation of the mentality behind every move and every joke. Whether on stage, close-up or even parlor, Every magician will find something new to add to their act!

"Michael Dardant is one of magic's fastest rising stars with a load of North American magic trophies already accumulated, it won't be long before he's a hit on the International scene as well!"
-Shawn Farquhar

This product hasn't received any reviews yet. Be the first to review this product!

All prices are in USD. Copyright 2021 WolfeFX. Sitemap | Shopping Cart Software by BigCommerce